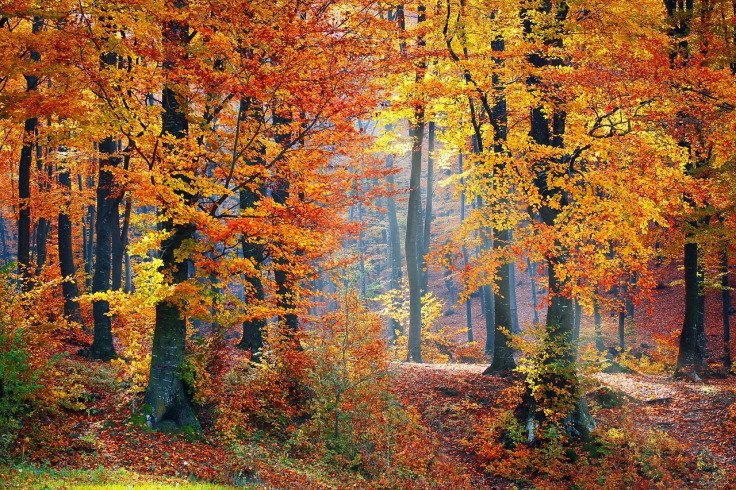 “Come, little leaves," said the Wind one day, "Come to the meadows with me and play.

Put on your dresses of red and gold; For Summer is past, and the days grow cold.”

As nature’s clock measures out the last of the summer sun’s radiance, autumn patiently waits beyond the horizon eager for it's chance to guide a green and vibrant landscape towards a slumbering period of hibernation. Despite the continued incandescence in the sky there will be a noticeable easing in the daily temperature as the seasonal clock counts down towards the winter solstice.

Meanwhile as the land inches its way towards the darkest months, flora and fauna will slowly start the process of shutting down and protecting themselves against the ravages of their landlord’s climatic austerity. Animals of the wild, sensing the impending chill, set about stocking their winter larders in preparation for the dark skies of winter. We, however, are audience to some of the most spectacular shades and hues of colour that the natural world can generate. Across the countryside an ever changing palette of colour adorns the trees, hedgerows, hills and pastures making everyday a different portrait to behold.

Boreas having slumbered the summer months stretches and yawns breathing deeply in readiness to blast his breath of cold northern winds upon the leaves desperately trying to maintain their grasp upon the stout limbs that months earlier had given birth to them. His tempestuous exhalation chases the now orphan leaves across the forest floor, into the air and around the trunks of oaks, ash and birch. This relentless flurry maintains its vigorous endeavors, tugging at the few surviving stragglers until the forest’s branches are stripped bare and the ground is thickened to a soft carpet. A veritable patchwork of  differing leaves forming layers, ready to insulate the ground beneath from winters dark, damp and chilling dominance.

Meanwhile urbanites scurry around winterizing their havens treating lawns and tending vegetation. Cutting back, hunkering down and tidying away all the better to ward off the effects of the chilled white dusting left behind by Jack Frost's terpsichorean abandon as he makes his way across the early morning undulating topography.

All the while shades of saffron, rusty brown and burnt umber now predominate the countryside horizon while the loamy smells from the leaf mulch underfoot waft heavenwards intoxicating all that walk among them. Cold hearths are primed with seasoned logs and gently blown into flame, crackling and hissing their protests as the conflagration consumes them and fights against the falling mercury. Chimneys belch out plumes of grey clouds thickened by the dampness of the fuel and the chill of the air. Wafting around ghost-like and unhindered by gravity these smokey specters intoxicate the air until only the faintest odor remains.

This is the way I see autumn. A multi sensory vista that, despite its brevity,  showcases a snapshot of the natural world's magnificence.